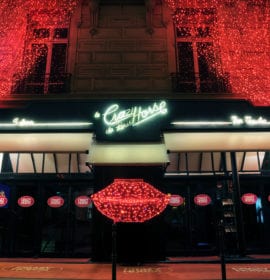 The Crazy Horse Paris is probably the longest running and most famous strip club in the world. The man behind the club was Alain Bernardin had a very varied background but had finished up running a successful restaurant , his wife had died of cancer and he took up with a singer called Julianne and he initially started the club in an old wine cellar on the Avenue George V to promote her career. The venue was called the “Crazy Horse Cabaret” named after the American Indian Chief and when it started it featured a doorman dressing as a Canadian Mountie on a horse.